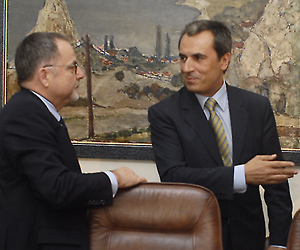 The OLAF Directoor Franz-Hermann Bruner (left) made it clear he expected to see tighter control over the absorption of EU money. Photo by Kameliya Atanassova (Sofia Photo Agency)
The Director of the European Anti-Fraud Office Franz-Hermann BrГјner said Friday he expected the Bulgarian state institutions would exert stricter control over the absorption of EU funding.

After his meeting with Bulgaria's Finance Minister Plamen Oresharski, BrГјner announced the main topic of their conversation was how to prevent the abuses with EU money.

He underscored the best way to tighten the control and to prevent malfeasance was by improving the communication between the state institutions.

Bulgaria's Minister of Finance in turn said over 1300 Bulgarian civil servants, mostly from the National Revenue Agency, had been trained by OLAF to discover abuses with EU funds.

Oresharski also stated his minister had not been specifically criticized for any violations, and that Bulgaria was not ranked among the countries with the gravest financial abuses.