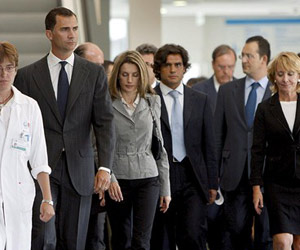 Spain's Crown Prince Felipe (second on the left) and his wife Letizia (third on the left) visited Friday the hospitalized persons, who were injured in the Madrid plane fire. Photo by BGNES
Spain's Crown Prince Felipe and his wife Letizia visited Friday the October 12 Hospital, where some of the injured in Wednesday's plane crash at the Madrid Airport are undergoing treatment.

The Spanish royal couple also visited the eldest son of the former Bulgarian tsar and PM Simeon Saxe-Coburg, Kardam, who is in coma in the same hospital after he was injured in a car crash in Madrid on Saturday.

153 persons perished after a passenger jet caught fire during takeoff on Wednesday. The exact causes of the incident are still unclear as according to Spanish aviation experts, an overheating of the engine was unlikely to spark the fire, and the plane must have had several faults.