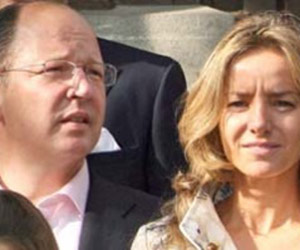 According to Dicheva, the entire family, including the father - Simeon Saxe-Coburg, was in the hospital while his press center in Bulgaria continues to receive letters and phone calls expressing the support of many Bulgarians for the royal family.

His wife Miriam Ungria was also injured in the accident, but it was announced that she was in stable condition.

The family had to be airlifted from the crash scene and transported to two Madrid hospitals where they still remain.

Prince Kardam was born on December 2, 1962 in Madrid and as the first-born son of Simeon Saxe-Coburg, could have claims to become the head of the Bulgarian royal family.

The Prince has studied philosophy and international business in the US and has a degree in agricultural economy from "Penn University" also in the US.

His first job was in the city of Buenos Aires where he began working in 1989.

Kardam lives and works in the US. He has been as an agricultural economist for the GIC company in Virginia and later became the Trade Director of a telecommunications company and Chief Executive for projects of UMTS.
Society » Be a reporter: Write and send your article
Advertisement
Advertisement
Expats.bg All Are Welcome! Join Now!
More from Society