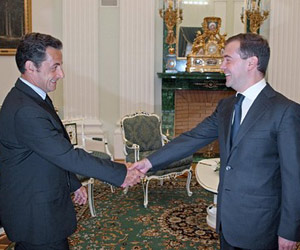 The French President Sarkozy (left) and the Russian President Medvedev (right) agreed on six principles to resolve the South Ossetia conflict after a four-hour meeting. Photo by BGNES
During their meeting Tuesday Russia's President Dmitry Medvedev and his French counterpart Nicolas Sarkozy, who is also presiding the EU, agreed on six principles for the resolving of the Georgia-South Ossetia conflict.

The principles were crafted after four hours of negotiations between the two with the participation of Russia's Prime Minister and former President Vladimir Putin.

The Presidents agreed that, first, the sides in the conflict should abstain from using force; second, that all military activities would be terminated; and, third, that all persons in the region should have free access to humanitarian aid.

The fourth principle states the Georgian forces would return to their positions of permanent location before the conflict started, whereas the fifth stipulates would withdraw at their previous position but would be allowed to take additional security measures until an international peacekeeping mechanism was set in place.

Russia's President Medvedev also confirmed the end of the military operation of the Russian Army in Georgia that he declared earlier the same day in a telephone conversation with the High Representative for the Common Foreign and Security Policy Javier Solana.

Solana in turn has confirmed EU's commitment for the achieving of a lasting resolution of the South Ossetia problem.

The French President Nicolas Sarkozy, who also presides the EU, said at the beginning with his meeting with Medvedev in Moscow that the ceasefire decision was expected and welcomed, and that it now had to be adhered to.

Russia's President stated in turn that Sarkozy did the right thing by visiting Moscow, and welcomed his proactive position for the resolution of the South Ossetia crisis.

After his visit to the Kremlin, Sarkozy is flying to the capital of Georgia Tbilisi.