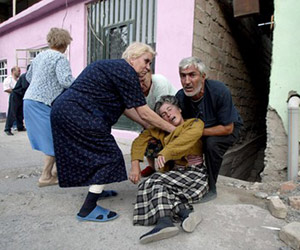 Death toll in Tzkhinvali has reached over 2,000 Monday while 34,000 have left their homes Photo by BGNES
The Georgian army has continued Sunday night into Monday to fire rockets at the South Ossetia main city Tskhinvali, while Interfax announces three have been killed and 18 Russian peacekeepers have been injured.

Russian military planes on their part, bombarded during the night the radars at the Tbilisi international airport and have caused "light damage', per statements of the Georgian Foreign Ministry.

The Foreign Ministry spokesperson explained that the airport was functioning on normal schedule. He also has said that tens of Russian military planes have bombarded civilian sites in the city of Gory, which is the biggest Georgian city close to South Ossetia.

"The actions of the Russian Federation endanger not only the lives of Georgian civilians but also those of high ranking guests'" the document reads.

Bernard Kouchner, French Foreign Minister arrived late Sunday in Tbilisi as a representative of his country, which is currently the European Union Chair.

According to statements made by Aleksandr Novitski, one of the Russian Army high ranking commanders, before Interfax, Russia was sending an additional 9,000 new troops to the other Georgian separatist Republic of Abkhazia. These were landing troops to be supported by 350 tanks, Novitski had said.

3,000 Russian peacekeeping forces have been sent to Abkhazia after the truce of 1994. There are also Russian military bases in Abkhazia as well as many citizens of the Republic who hold Russian passports.

The Georgian Foreign Ministry has said that the Georgian armed forces have pushed out all attacks in the upper part of the Kodor Valley, which until now has been the only part of Abkhazia fully controlled by the Georgians.

The Abkhazians on their part have announced that their armed forces have completely blocked the Georgian army in the Valley as well as all roads leading in and out of it.

The Russian military has extended an ultimatum to the Georgian army located near Abkhazia to give up their armament, otherwise Russia would attack them, however the Georgian side had not accepted the ultimatum, reports Interfax.

In the mean time according to ITAR-TASS, the Presidents of both separatist republics - South Ossetia and Abkhazia have spoken on the phone an have agreed to ask the international community to officially recognize their counties, independence in the very near future.

The national Azerbaijan airlines serving Baku and Tbilisi have terminated all daily flights to Tbilisi due to the military conflict.

"The Georgian government political goal is not to place South Ossetia under any totalitarian control. The need of an autonomy in the area remains, but it must be at the level of the highest European standards," said Aleksandr Lomaya, Secretary of the Georgian Security Council in an interview before the Moscow newspaper "Novosti."

"Despite the military conflict and the bloodshed there is still a possibility to lead all this to a peaceful dialogue. The information that Georgian military forces have fired at Russian peacekeepers is entirely sacrilegious. We propose that Russia becomes one of the main guarantors for the autonomy of the Ossetia region as part of Georgia," Lomaya stated.

Lomaya also has said Sunday that Tbilisi had asked the US to become a negotiator for the solution of the conflict between Georgia and Russia.

In the mean time, leading world information agencies announce that the death toll in Tskhinvali has reached over 2,000. Many people are without shelter and have been living for three days in dugouts without enough food or water.

According to eyewitnesses, many are still buried under the debris in Tzkhinvali while the artillery fire was continuing. There have been announcements about sharpshooters hiding in the debris.

Moscow has defined the situation in Tskhinvali as a "humanitarian crisis", while the Russian Emergency Situations Ministry has organized a refugee tent camp near the town of Dzhava in South Ossetia.

50 of the wounded have been transported to Russia to receive medical care.

The Russian Premier Vladimir Putin has said that the total number of people who have left their homes has reached over 34,000.

Georgian President Mikheil Saakashvili had warned the Western Countries to not abandon Georgia saying that such act would weaken the democracy in the entire former Soviet Union.

"If Georgia falls, this will also mean the fall of the West in the entire former Soviet Union and beyond. Leaders in neighboring states - whether in Ukraine, in other Caucasian states or in Central Asia - will have to consider whether the price of freedom and independence is indeed too high," Saakshvili says in a letter published by the US Wall Street Journal.

Saakashvili ordered ceasefire Sunday and Georgia officially submitted a ceasefire note to the Russian Consul in Tbilisi, however, Russian authorities claim that the Georgians have not observed the ceasefire and continue to strike Tskhinvali.