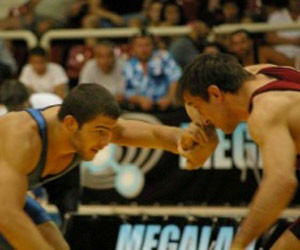 The saga began Saturday when one of the best Bulgarian competitors, world and European freestyle wrestling vice champion Anatoly Guidia ruptured an Achilles tendon during a training session and had to be taken to a local hospital in Beijing for surgery.

The spokesperson of the Bulgarian Olympic Delegation, Todor Shabanski, officially announced Saturday that Guidia was out of the Olympic competition.

The champion's injury and dropping off the Games comes as a hard blow for the Bulgaria wrestling team because the Lovetch wrestler had been in excellent form and was among the top favorites to win Olympic medals.

The saga, however, continues Sunday, after it became clear that Redzhep was not going to be able to participate in the Beijing Olympics either, because he became involved in a serious car accident on his way to Sofia.

The young wrestler was supposed to arrive in Sofia at 11 am Sunday morning to catch the 12:30 pm flight to China.

It is currently known that Redzhep had left his hometown of Assenovgrad Saturday evening in his own car and has been driving alone.

He has been very close to Sofia when his car had a flat tire, fell into a ditch and finally stopped while hitting a tree near the road.

Redzhep is currently in a hospital in Sofia with a cracked rib.

Ismail Redzhep is a world and European youth freestyle wrestling champion and had trained non-stop for the Olympics. According to media publications, the Bulgarian Wrestling Federation had made all possible efforts yesterday to arrange for Guidia's replacement by Redzhep, including incredible efforts on the part of the Bulgarian Olympic Committee to arrange for Redzhep's flight to China.