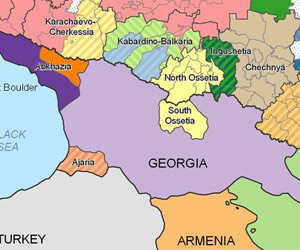 The breakaway province of Abkhazia has started a military offensive against the Georgian forces while the South Ossetia conflict is still going on. Map by colorado.edu
The armed forces of the breakaway Georgian province of Abkhazia have launched an operation to push Georgia's troops out of the Kodor Valley - the only part of the Abkhazian territory that they control.

The news was announced by the Foreign Minister of the unrecognized republic Sergey Shamba.

The attacks are accompanied by aerial bombardments on the Georgian positions but it is not clear whether attacking planes were Russian or belonged to Abkhazia.

Earlier on Saturday Abkhazian officials accused Georgia of piling up troops along its border.

Abkhazia attempted to secede from Georgia at the same time South Ossetia did in 1990-92. However, it has not received any international recognition.