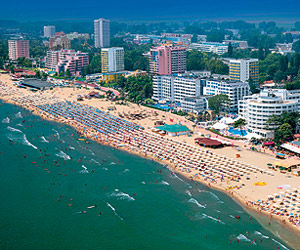 The hotel owners from Bulgaria's resort Sunny Beach will sue the EVN electricity provider over the recent power outage, which caused great discomfort to thousands of holidaymaker. Photo by vacanzia.bg
The Union of Hotel Owners in the Bulgarian Black Sea resort of Sunny Beach are going to file a collective suit against the local electricity provider EVN over the recent power outages in the complex.

The news was announced Tuesday after a meeting of between the owners and EVN, which took place in the town of Nessebar.

According to EVN, the power outage on July 5, which left the thousands of tourists in Sunny Beach without electricity for five hours, was due to a failure in a distribution network not owned by them.

The company representatives pointed out that the problems resulted from the fact that lack of proper urban planning in the region and the lack of a clear vision for the development of the resorts around Sunny Beach.

The hotel owners claim that the company failed to notify them about the failures as they had agreed earlier. If the court finds the Italian-owned provider EVN guilty, each individual owner will file its own suit against the company.

The Union is also considering referring the case to the Bulgaria EU Commissioner Meglena Kuneva, who is in charge of consumers' protection.