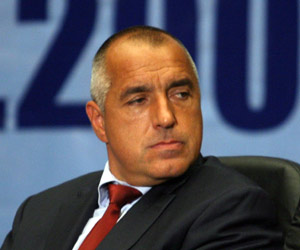 In an interview before the Bulgarian private TV channel bTV, Borisov said the Interior Minister Mikov was starting to prepare an alibi for the governing parties in case an assassination against him took place.

On Monday the Minister stated that the Interior was wasting precious resources to provide security guards to the Sofia Mayor but added he had no idea why Borisov needed such measures - because of his current position or because of something in his past.

"They are preparing the situation - this clique around the Bulgarian Socialist Party and the Movement for Rights and Freedoms - so that if something happens with me, they would be able to attribute it to some conflicts in the past", Borisov stated.

He added that the Bulgarian Interior Ministry had received intelligence information about a possible attempt on his life from foreign secret services.

With respect to the possible motives for his assassination, the Sofia Mayor explained that he had detained tons of narcotics and had helped for the busting of thirty illegal workshops printing fake banknotes during his term as Chief Secretary of the Interior Ministry (2001-2005).

He also said he had initiated dozens of inspections of corruption and criminal activities within the Sofia Municipality since he first became Mayor in 2005.

"If this happens - if the leader of GERB Tsvetan Tsvetanov or the leader of Ataka Volen Siderov became Prime Minister after my assassination - I would really not be so sorry if this happened. This way at least I will be able to look at these nice guys (i.e. the Bulgarian Socialist Party and the Movement for Rights and Freedoms) from above, and to witness their fiasco", Borisov commented with respect to the scenarios for his potential politically motivated murder.

The Sofia Mayor insisted that the BSP and Mikov should say why exactly they dismissed the former Interior Minister Rumen Petkov - whether it was because of incompetence, or because of corruption and connections with organized crime groups.