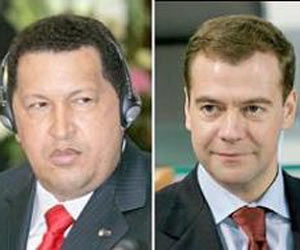 "I watch the rebirth of Russia with great respect and great love," Chavez told Medvedev at the beginning of the meeting.

"Russia and Venezuela must become strategic allies in the oil sphere and in military-technical cooperation," Chavez added, as cited by the RIA Novosti news agency.

He also passed to Medvedev kind regards from "Fidel (Castro) and other friends in Latin America."