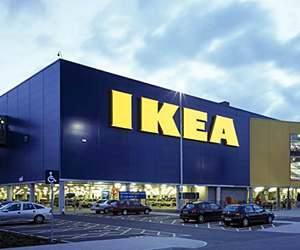 The plot for the building of IKEA's first hyper store in Bulgaria has already been purchased. Photo by wordpress.com
The Greek company Fourlis, who is the authorized licensee of IKEA for Greece, Bulgaria, and Cyprus, has purchased the plot for the first store of the Swedish furniture giant in Sofia.

The news was reported Friday by the Bulgarian newspaper Pari Daily, which also announced that the plot for IKEA's hypermarket was about 60 000 square meters, and was located in the Vitosha Quarter in Sofia.

According to Pari, this plot was part of a larger one bought earlier by another Greek company - Danaos Development.

Froulisis planning to open three furniture stores in the Balkans in 2009, and a total of 11-12 IKEA stores by 2013, two of which will be located in Bulgaria.

Bulgaria has been chosen for the opening of a store of the Swedish giant because of the increased demand for furniture caused by the booming construction of new apartments.

Pari reminds that presently the two IKEA stores closest to Bulgaria were located in Thessaloniki and Istanbul.