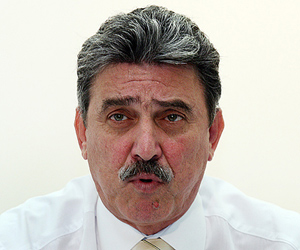 NPP Director Ivan Genov stated Thursday that the accusations of corruption in Kozloduy were a smearing campaign against Bulgaria Photo by Yuliana Nikolova (Sofia Photo Agency)
The Director of the Nuclear Power Plant "Kozloduy" Ivan Genov has defined accusations of corruption in the NPP's management as a smearing campaign against Bulgaria's nuclear energy production.

Genov made his statements before Darik radio Thursday in connection to corruption accusations coming from the NPP's former employee Georgi Kotev.

Genov voiced his suspicions that nuclear expect Georgi Kaschiev, a Bulgarian living in Austria, who for years now has been a strong opponent of the construction of the new NPP "Belene" was behind Kotev's accusations.

The NPP's Director further explained that "Kozloduy's" management had informed the Prosecutor's Office, the State Agency for National Security (SANS) and the International Energy Agency (IAE)

Kotev had stated before Darik radio earlier this week that the NPP imports recycled nuclear fuel instead of fresh one and somebody was profiting from the price difference.

Genov, on his part, explained that there was internal and external control over the fuel import while the plant imports from the Russian company "TVEL". Genov firmly denied having business and intermediary relations with other companies.

The IEA is supposed to check up the stored nuclear fuel in a matter of months. Genov was adamant that he would resign if the fuel ended up being recycled and would surrender to the Prosecutor's Office.

The NPP's management did however point out that Kotev was one of the best nuclear experts to have worked in "Kozloduy" and explained his actions as part of a bigger plot created by Georgi Kaschiev, who currently teaches in Vienna.

Genov believes that the recent widespread rumors about increased radiation levels near NPP "Kozloduy" were part of the same plot directed against Bulgaria's nuclear energy production.