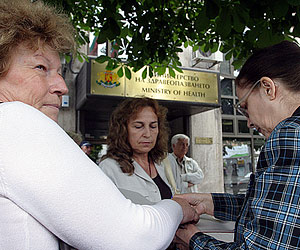 The medication is known under the name "Antimalignocit" and has been discovered by a Bulgarian - Prodan Hristov. Hristov lives in Austria and for years has been sending the medication to cancer patients Bulgaria.

Documents for the registration of the medication have been filed several times with the Bulgarian Drug Agency, but the Agency has always said that documentation has been insufficient. So far none of the licensed laboratories and institutions in Bulgaria has confirmed the medication's healing properties while people continue to supply the drug through packages mailed directly by Hristov.

"The problem with the "Antimalignocit" medication is not anything new, it is a 16-years old problem. The first attempts on the part of Hristov to file the ever-disappearing documentation date from 1992. The last letter he had received includes a number of requirements he cannot fulfill. The medication is 100% nontoxic and attacks only the cancer cell without harming the rest. It has been proven on many occasions," said Katya Pecheva from the "Antimalignocit" association.

The Health Ministry has issued a statement for the media to alarm the public that the way the medication enters Bulgaria was illegal and no other country would allow such violation.