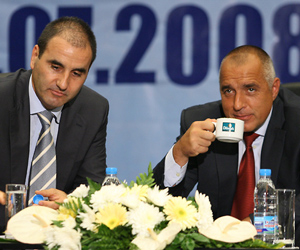 The Chair of the GERB party Tsvetan Tsvetanov (left) and its informal leader, the Sofia Mayor Boyko Borisov (right) attended the party's first National Assembly on Saturday. Photo by Yuliana Nikolova (Sofia Photo Agency)
The Chair of GERB Tsvetan Tsvetanov stated Saturday that his party was aiming at governing the country on its own but that the forming of a center-right coalition was also a possibility.

Before the first National Assembly of the party, whose informal leader is the Sofia Mayor Boyko Borisov, Tzvetanov was explicit that there were no other options for GERB, i.e. governing the country with non-rightist parties.

The party Chair still expressed his preference for one-party rule because it would be the best way to realize GERB's political goals without making any compromises.

Tzvetanov did point out, however, that Bulgaria needed the potential of all political parties in the center-right political spectrum.

The informal leader of GERB, the Sofia Mayor Boyko Borisov stated that Bulgaria needed early elections in September in order to prevent a catastrophe caused by the policies of the governing three-way coalition.

In his speech before the Assembly, the Sofia Mayor also stated that if the troubled steel mill Kremikovtzi got declared bankrupt in order to sell it cheaply after that, this would be the greatest plunder of the new century.

Several recent public opinion polls have found GERB to be Bulgaria's most popular political party winning the trust of about 25% of the eligible voters compared to about 17% for the closest second - the ruling Bulgarian Socialist Party.
Politics » Be a reporter: Write and send your article
Advertisement
Advertisement
Expats.bg All Are Welcome! Join Now!
More from Politics