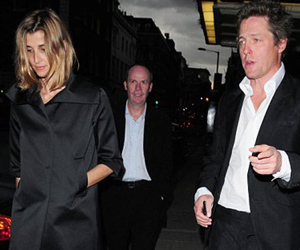 Princess Rosario of Bulgaria and actor Hugh Grant were photographed leaving the Claridges hotel together Photo by the Daily Mail
The press services of the royal family of Simeon Saxe-Coburg has offered explanations regarding the picture of Princess Rosario Nadal of Bulgaria, daughter in law of Simeon Saxe-Coburg, with actor Hugh Grant and comments in the media about their relationship.

Princess Rosario, according to the royal press center is a modern art expert working for quite a while with the pictures of the best-known London artist at the moment Richard Prince. Hugh Grant is a client of the artist and had purchases a valuable painting.

This has been the reason why the three of them had dinner at the Glaridges hotel in London.

The picture was taken when they were leaving the hotel and the person between Rosario and Grant is actually Richard Prince himself.

The families of Prince Kyrill, Rosario's husband and of Richard Prince maintain close friendly relations as well, but the Prince had not attended the dinner since it has been a business related occasion.

Wednesday evening Prince Kyrill and Princess Rosario are invited to attend an official dinner dedicated to the 90th birthday celebration of Nelson Mandela. Many dignitaries, state officials and famous stars are expected to attend the dinner as well.