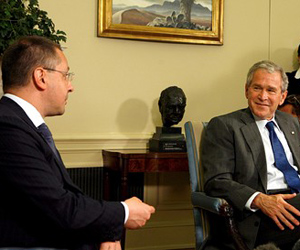 US companies have reportedly expressed interest in investing in Bulgaria's NPP Kozloduy during PM Stanishev's (left) visit to Washington, DC. Photo by BGNES
American companies have expressed their interested in the re-opening of Units 3 and 4 of Bulgaria's first nuclear power plant at Kozloduy during Prime Minister Sergey Stanishev's official visit to Washington, D.C.

The news was announced Friday by the Bulgarian newspaper Standart Daily, which cites sources from Stanishev's delegation to the USA.

The unspecified US companies also requested information about the opportunities to construct a seventh and even eighth nuclear reactor at the Kozloduy plant. Their interest was reported caused by the fact that 30% of the preparatory work for the construction of two new units had already been carried out.

This preparatory work is said to include the procedure for coordinating the project with neighboring states, determining the construction site, and the preparatory infrastructure and the research center for the future Units 7 and 8.

During his meeting with the US President George W. Bush, Bulgaria's PM has presented President Parvanov's idea for the launching of a large-scale energy forum in Sofia, which would aim to turn Bulgaria into the energy center of the Balkan region.

The first four 440-MW units of the Bulgarian nuclear power plant at Kozloduy were closed down in 2002 (Units 1 and 2) and in 2006 (Units 3 and 4) after the Bulgarian government made agreement with the EU over the issue.

Their closing is widely believed to have been the result of pressure by several older EU members, which feared potential problems with the Soviet-made reactors.

At present only the two 1000-MW reactors, i.e. Units 5 and 6, of the Kozloduy NPP are operating. The Bulgarian government has meanwhile started a procedure for the construction of a second nuclear plant located in the Danube town of Belene.