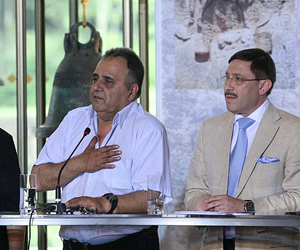 Director of the National Museum of History, Prof. Bozhidar Dimitrov (left) and PR of the campaign Maxim Behar (right), say the Madara Horseman would look best on the Euro coins. Photo by Yuliana Nikolova (Sofia Photo Agency)
Debates about the design of the future Bulgarian Euro coins continue in the country with people choosing between the rose, the Rila monastery, the Madarski Konnik (Madara Horseman) rock relief, and the Cyrillic alphabet.

The national television organized a discussion, in which historians, ministers, intellectuals and businessmen divided up in team argued about the relevance of each symbol and tried to find out which will look best on the European money.

According to the director of the National Museum of History, Prof. Bozhidar Dimitrov and PR of the campaign Maxim Behar, the Madara Horseman rock relief is one of the oldest Bulgarian symbols and should be placed on the Euro coins as it would also look great on them.

The relief near Bulgaria's town of Shumen depicts a majestic horseman thrusting a spear into a lion lying at his horse's feet while an eagle is flying in front of the rider and a dog is running after him. The scene symbolically depicts a military triumph and was engraved in the rock during Khan Tervel's rule.

Minister of State Administration Nikolai Vasilev backed the idea that the Cyrillic alphabet is the greatest Bulgarian symbol while Deputy PM Meglena Plugchieva said the Rila monastery as a symbol of the Bulgarian identity should be on the back of the coins.

Discussions will continue until June 29 when a vote will decide what will be the Bulgarian symbol on the Euro. Bulgarians could vote for a symbol in post offices, gas stations and schools.