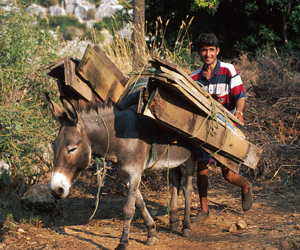 The prices of draught animals in Turkey has grown several times as many have given up their tractors due to the high fuel prices. Photo by photoseek.com
The prices of donkeys in the Yozgat District in Central Turkey have increased sevenfold as many local people are giving up the use of tractors over the high fuel prices, and substitute them with the beasts of draught.

Because of the increased demand the price of one donkey grew from EUR 26 to about EUR 180, the Turkish newspaper Zaman reported.

According to the paper, the number of people in Turkey using donkeys instead of tractors had grown twice. The diesel in the country already costs EUR 1,6 per liter.