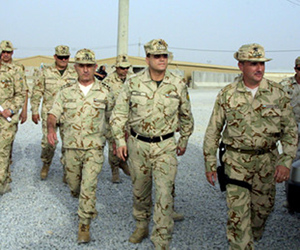 Bulgaria's Defense Minister Nikolay Tsonev (middle) and the Chief of the General Staff Gen. Zlatan Stoykov (left) paid Monday a surprise visit to the Bulgarian rangers in Afghanistan. Photo by BGNES
Bulgaria's Defense Minister Nikolay Tsonev paid a surprise visit to Afghanistan Monday, where he celebrated his birthday with the Bulgarian troops from the International Security Assistance Force.

The news was officially announced Tuesday by the press service of the Bulgarian Ministry of Defense. Tsonev was accompanied by the Chief of the General Staff of the Bulgarian Army Gen. Zlatan Stoykov.

The Bulgarian Defense Minister first visited the Warehouse Base in Kabul where the Bulgarian mechanized unit is located. The Deputy Commander-in-Chief of the ISAF Gen. Jonathan Riley met the Bulgarian delegation and expressed his high opinion of the work of the Bulgarian rangers.

After that, Minister Tsonev and General Stoykov flew to Kandahar, where a Bulgarian unit is guarding the airport. The Minister celebrated his birthday there.

During their meetings with Nikolay Tsonev, the Bulgarian rangers stated their demands to keep their uniforms after their service. They also demanded their pay be increased from the present EUR 60 that they receive per day.

The Minister has promised he would find some way to increase the rangers' payments.

There have been no serious attacks against the Bulgarian troops in Afghanistan but the unit stationed in Kandahar complained that they were constantly shot at with missile launchers and mortars.

Bulgaria is presently taking part with 420 soldiers in the NATO operation in Afghanistan. Its forces there include a mechanized unit and a mechanized platoon stationed in Kabul, a guarding unit located in Kandahar, and three medical units in the military hospitals in Kabul and Herrat.

Last week the Bulgarian government decided to send 70 more Bulgarian rangers, 50 of whom are going to guard a checkpoint at the Kandahar airport. This will bring the total number of Bulgarian troops there to 490.