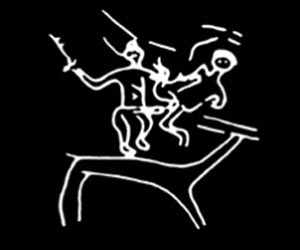 The drawings are on the eastern fortress wall of Preslav, which was the capital of the First Bulgarian Empire from 893 to 972 and one of the most important cities of medieval Europe.

Archaeologists say that the ancient graffiti were thoroughly examined in the 70s but they had not gained much popularity until recently.

The director of the national archaeological reserve, Alexander Gorchev, said that it is not clear who was the author of the drawings but scientists suppose authorship belongs to Bulgarian soldiers or workers from the 10th century.

Mr Gorchev added that there is an idea to create an "alley of love and sex" in the fortress in order to further popularise the drawings among tourists.

"If we consider the artistry of the drawings, we could say the medieval inhabitants of the old Bulgarian capital had elaborate sex lives," Gorchev also said.