Bulgaria FC CSKA Without License, Out of Champions' League 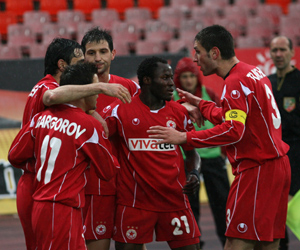 The news was officially announced Tuesday by the Chair of the License Committee of the Bulgaria Football Union Krasin Krustev.

"We will not give CSKA a license. We already sent a letter to UEFA notifying them that the "red team" does not meet the licensing standards. Now everything depends on UEFA's decision", Krustev said.

In his words, CSKA did not meet the criteria under 17 different items of the licensing document, which meant it would not be able to take part in the next edition of the UEFA Champions' League.

Krustev also said no other Bulgarian team could replace CSKA in the prestigious tournament.

The Executive Director of the Bulgarian Football Union Borislav Popov said BFU has asked UEFA for an extension on the case but had received no reply yet.

In his words, the drastic measure had been taken because the club had not paid back its debts, but had also been accruing newer and newer debts.

"CSKA has had debts to the state in the last three years, it has not paid the salaries and transfer sums, and it is also in debt to banks and private creditors", Popov explained.

According to the BFU, the best-case scenario for the club would be if UEFA somehow showed mercy and allowed it to take part in the Champions' League. In the worst case, the Bulgarian champion would be declared bankrupt and its license for the professional league would be revoked, which meant it would have to play in the "C Group" next season.

It is still believed the debts of CSKA could be settled by August 9, when the Bulgarian championship begins.

Meanwhile, the President of the Club Aleksandar Tomov was almost lynched by angry CSKA fans throwing bottles at him and considering him guilty for the whole situation.

Tomov has repeatedly stated all debts of the club had been settled. After Tuesday's press conference of the BFU, he said CSKA was going to appeal the revocation of its license.