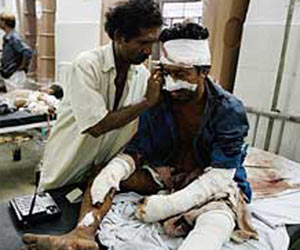 As many as seven explosions struck the western city of Jaipur and another bomb was found and defused, Indian media reported.

About 200 people were wounded in the attack.

The blasts went off in the historic district for which the city is famous as one of the bombs hit a temple to the Hindu monkey god Hanuman in time when it attracts many worshippers.

There were no immediate claims of responsibility but authorities suspect Kashmiri militants who want independence for the contested Himalayan region.

According to The Times Of India, quoting unnamed sources, the blasts "pointed to a sophisticated operation that only foreign-trained groups are capable of executing."