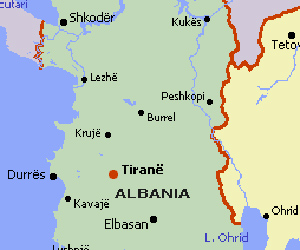 The town of Burrel in Northern Albania is allegedly the site where the organs of the kidnapped Kosovo residents were extracted after June 1999 in order to be traded abroad. Map by hotels-travel-map.com
New information has appeared lending credence to the allegations that 400 Kosovo residents, mostly Serbs, had been abducted after the 1999 War and taken to Albania where their organs had been extracted, the Human Rights Watch announced on its website Monday.

"Serious and credible allegations have emerged about horrible abuses in Kosovo and Albania after the war," said Fred Abrahams, a senior researcher at the international human rights NGO working on the issue.

The allegations that organs of abducted Kosovo Serbs had been extracted and traded after Serbia pulled out of Kosovo in 1999 were published in the book of Carla Del Ponte, former chief prosecutor of the International Criminal Tribunal for the former Yugoslavia (ICTY) titled "The Hunt: War Criminals and Me".

The Human Rights Watch states that it considered credible the information of the ICTY that individuals in Kosovo had abducted and transported between 100 and 300 persons from Kosovo into northern Albania after June 12, 1999, when NATO forces entered Kosovo.

The reports contain the testimonies of seven ethnic Albanians who served in the Kosovo Liberation Army. According to the allegations, the organs of the abducted Kosovo residents, mostly Serbian men but also women from Kosovo, Albania, Russia, and other Slavic countries, were extracted by doctors close to the town of Burrel in Northern Albania. After that the organs allegedly left Albania through the Tirana Airport.

Human Rights Watch has also obtained a copy of an official report of the United Nations Mission in Kosovo from the February 4-5, 2004 investigation, titled "Forensic Examination and Assessment in Albania," which largely corroborates Del Ponte's claims.

"The information on organ trafficking is suggestive but far from complete. But the fact remains that hundreds of people, most of them Serbs, are reported to have gone missing after the war", Abrahams stated.

Human Rights Watch states it had not conducted its own investigation into the reports, beyond viewing the material presented to the ICTY, obtaining the UNMIK investigation report and speaking with two people who were present during the investigation in Burrel.

However, the NGO sent letters on April 4 to the Kosovo Prime Minister Hashim Thaci and Albania's Prime Minister Sali Berisha to investigate the allegations about the abductions and organ trafficking.

By May 2 neither government had replied to the appeal and the Albanian Foreign Minister Lulzim Basha dismissed Del Ponte's allegations as "immoral" and "libelous.