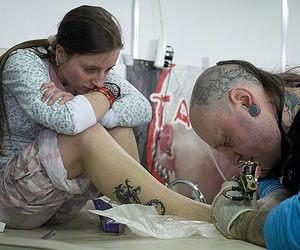 The colourful event has attracted many young people, eager to show their tattoo, deck with a new one, or just listen to the number of underground bands performing at the show in Hristo Botev Hall.

Other events to take place during the fest include a fashion show and hairstyling demonstrations.

For the first time tattooists from Italy and Turkey also participate.