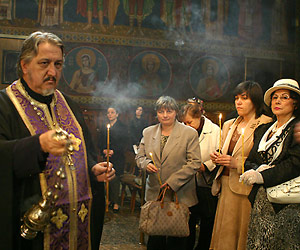 The assault, defined as one of the heaviest ones on Bulgarian territory, was carried out on 16 April 1925, when a group of the the country's Communist Party (BCP) blew up the roof of the church.

This occurred during the funeral service of General Konstantin Georgiev, who was killed in another Communist assault on 14 April.

It was pure luck that none of the members of the government were killed in the attack.

Tsar Boris III was not in the church as he was attending a funeral service of the victims in an assassination attempt on his life two days earlier.

Among the victims were General Kalin Naydenov, Minister of War during World War I, Stefan Nerezov, commander of the Bulgarian Army at Dojran, the then-Mayor of Sofia Paskal Paskalev, the country governor Nedelchev, the chief of police Kisov, three deputies, 25 women and children.

The evening after the assault in St Nedelya, martial law was declared.

The attack caused a wave of illegal repressions organized by the Military Union with the government's tacit approval. During the following two weeks, approximately 450 people were killed without being sentenced, including figures like poet Geo Milev and journalist Yosif Herbst. Many other communists were heavily judged for taking part in the terrorist organization.

The Military Organization leaders Kosta Yankov and Ivan Minkov were among those assassinated. A few of the organizers of the act, such as Petar Abadzhiev and Nikola Petrov, managed to escape to the Soviet Union.

The assault trial was up before a military court in Sofia between 1 and 11 May. Petar Zadgorski and Lieutenant-Colonel Georgi Koev were sentenced to death. Stanke Dimitrov, Petar Abadzhiev, Dimitar Grancharov, Nikolay Petrini and Hristo Kosovski received capital punishment by default, with the last three already being killed in the previous weeks.

Marko Fridman, the highest-ranked individual of those accused, confessed that the organization was financed and supplied with weaponry from the Soviet Union, but pinned the responsibility on Kosta Yankov and Ivan Minkov, who, according to him, acted without the BCP management's agreement.