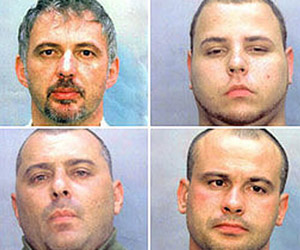 ''It was very satisfying,'' said the Miami Beach police detective who led six undercover colleagues in tracking down and arresting the four men, who are now in the Miami-Dade County Jail.

Authorities said they've been trying to catch the criminals for two years but managed to do so in the last few weeks after several area banks reported to Miami Beach police that customers complained about money being taken from their accounts.

The quartet used tiny cameras installed on ATM machines that recorded the victim's PIN number and devices that collected the account numbers. The Bulgarians then reprogrammed retail-store gift cards with the information to withdraw cash.

Police said that all four men were in the United States legally, on legitimate visas.