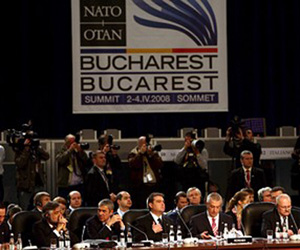 Macedonia was not invited to join NATO at the Summit meeting in the Romanian capital Bucharest because of the Greek veto over the name dispute. Photo by BGNES
During its ongoing Summit in Bucharest NATO decided not to extend a membership invitation to Macedonia for the time being because Greece vetoed the move after the dispute over the name of the former Yugoslav republic remained unresolved.

Nikola Dimitrov, Macedonia's negotiator with Greece in the name dispute, who made the announcement, also said the NATO leaders had agreed to extend a membership invitation to his country as soon as the name issue with Greece is resolved, the Bulgarian Information Agency BTA reported.

Dimitrov complained his country was punished not because of it had failed to fulfill NATO accession criteria but because it had been trying to defend its national identity.

Meanwhile, the Macedonian journalists left the press center of the NATO Summit in Bucharest as a sign of protest against the decision of the Alliance not to invite their country to join, the Bulgarian private Darik Radio reported.

NATO representatives have confirmed that the organization was going invite officially the other two countries of the Adriatic troika - Albania and Croatia - to become full members at a special meeting later on Thursday.

No membership invitations have been extended to the Ukraine and Georgia. NATO's enlargement with the two former Soviet republics has been a matter of tension within the Alliance as the US supported it but some of the key western European members opposed it over fears of Russia's potential reaction.