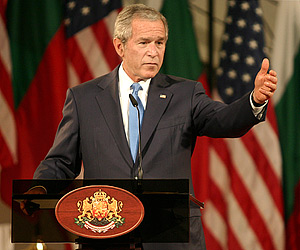 If Greece does otherwise, it would threaten to pile further pressure in the Balkan region, Bush said in a speech in Bucharest during the NATO summit that started on Wednesday.

"Tomorrow in recognition of their progress, NATO will make a historic decision on the admission of three Balkan nations Croatia, Albania and Macedonia," the president added.

Ahead of the NATO summit, Skopje declared the country wants to join the Alliance under the name Macedonia rather than as the Former Yugoslav Republic of Macedonia (Macedonia), under which it was admitted to the UN in 1993.

At the same time Greece vows to veto Macedonia's effort to join NATO, saying the name is a vehicle that aims at annexing the northern Greek province of Macedonia.