Putin without Right to Speak Publicly during NATO Summit 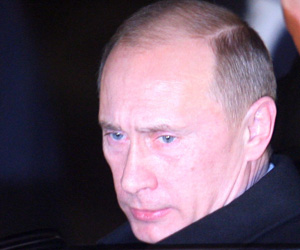 The Russian President Vladimir Putin might be unable to speak publicly at the NATO-Russia meeting in Bucharest because of the meeting's scheduled program. Photo by Yuliana Nikolova (Sofia Photo Agency)
The Russian President Vladimir Putin might not have the chance to speak before journalists during the NATO-Russia meeting, which is scheduled for April 4, the last day of the NATO Summit in the Romanian capital Bucharest.

According to the Russian Ambassador to NATO Dmitriy Rogozin, the format of the NATO-Russia meeting had been created so that Putin would not have the chance to make public statements, the Bulgarian Information Agency BTA reported citing Romanian and Russian media.

The Russian President will allegedly be able to speak only in the closed-door sittings of the NATO-Russia meeting, where journalists will not be allowed.

"It is becoming more and more obvious that the NATO leaders want to prevent the open discussion", Rogozin said, adding: "In this way the Russian President will not be able to speak publicly on the main international issues."