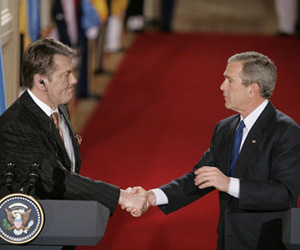 "The membership of Ukraine and Georgia is in NATO's interest", Bush said at a joint press conference with his Ukrainian counterpart Viktor Yushchenko.

He added that Ukraine was the only country that had participated in all of NATO's missions without being a member of the Alliance.

Bush stated explicitly the United States supported strongly Ukraine's admission to NATO. When asked if he would be able to influence Germany and France's potential opposition to this move, the American President said the respective arrangements had already been made.

"Russia must not block our membership in NATO", the Ukrainian President Yushchenko stated.

The question about Ukraine's accession to the North Atlantic Alliance is to be discussed at the NATO Summit in Bucharest that starts on Wednesday.