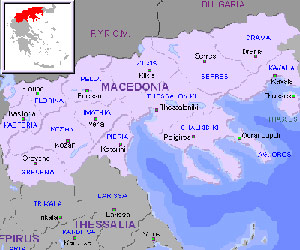 A large province in northern Greece is called Macedonia, and this is the main cause over the decade-long conflict over the constitutional name of Macedonia. Map by travelinfo.gr
The Foreign Ministers of Greece and Macedonia confirmed on Saturday their intention to solve the dispute over the name of the former Yugoslavian Republic.

The announcement was made by the Greek Foreign Ministry after a meeting between the Greek Minister of Foreign Affairs Dora Bakoyannis and her Macedonian counterpart Antonio Milososki that took place in Brussels in the presence of the US Assistant Secretary of State Daniel Fried.

A meeting of the negotiators of the two sides Adamandios Vasilakis and Nikola Dimitrov with the UN mediator Matthew Nimitz has been scheduled for next week. It will be the last round of negotiations before the NATO Bucharest Summit on April 2-4, and Athens still threatens it may block Macedonia's invitation to join NATO unless the name dispute is settled.

Greece disputes Macedonia's name because one of its northern region has the same name. It has already blocked Macedonia's recognition by the UN under its constitutional name, and that is why the latter is recognized by the world organizations as the Former Yugoslav Republic of Macedonia (Macedonia).

The Greek newspaper Vima wrote Saturday that the two sides would most likely agree on the name "Nova (New) Macedonia", because it was relatively neutral.

The negotiations are taking place under the auspices of the USA, which is eager to get the issue done with before the forthcoming NATO summit.