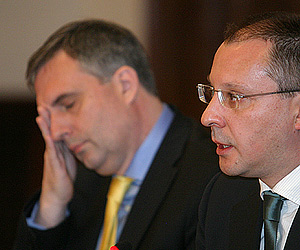 The announcement was made by Prime Minister Sergey Stanishev at a joint press conference with Foreign Minister Ivaylo Kalfin.
The cabinet agreed on establishing diplomatic relations between Bulgaria and Kosovo as both countries are to open embassies in the other state.

After the decision is taken, Bulgaria becomes the 18th EU member state, which recognized Pristina's independence.

"The three states are highly interested in securing maximum stability in the South-eastern Europe and a European perspective for all the countries in the region," the declaration reads.

The document claims also that Bulgaria, Croatia and Hungary will continue supporting the engagement of EU and NATO, concerning democracy building in Kosovo.

The three countries declared their commitment to strengthening ties and developing their close neighboring relations with Serbia.

Sofia, Budapest and Zagreb expressed their hopes that Kosovo institutions are going to guarantee the establishment of a multiethnic country, based on democracy principles, rule of law and rights for Serbian community's members there.

Kosovo's parliament overwhelmingly endorsed a declaration of independence from Serbia in an historic session, held on February 17.

The declaration, read by Prime Minister Hashim Thaci, said Kosovo would be a democratic country that respected the rights of all ethnic communities.