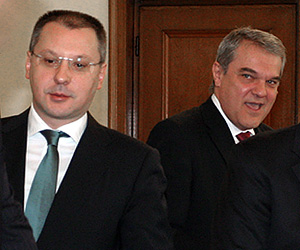 "Petkov committed a crime by patronizing an official who worked for the grey economy," Atanasov said, referring to the recent case with deputy director of the special GDBOP division for combating organized crime, Ivan Ivanov, arrested on Tuesday over allegations of leaked confidential information.

Atanasov, who is an MP from the rightist Democrats for Strong Bulgaria (DSB) and member of the Internal Security and Public Order Committee of the parliament, accused Petkov of staying idle despite he was acquainted with Ivanov's activities.

"Why does the investigation show no progress over the case?" Atanasov asks, adding that not Ivanov but the Interior Minister is the one whom society expects to be put in jail.

Atanasov also said that the prosecution is working under pressure on the Ivanov case but did not provide more details.

Borissov commented that "the government is running on autopilot" and it is high time Stanishev took some actions before the cabinet completely loses society's trust in institutions.