Bulgaria Disadvantaged in Race with Romania for Massive Austrian Investment 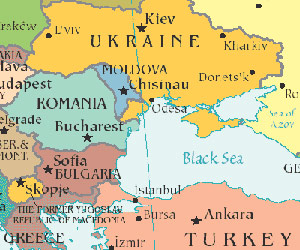 The Austrian steel maker Voelstahpine is to choose among Bulgaria, Romania, Ukraine, and Turkey for the location of its massive new investment worht EUR 7 B. Map by mytravelguide.com
Bulgaria is reportedly in a disadvantaged position in its competition with Romania to attract the EUR 7 billion-investment that Austria's steel-maker Voelstahlpine is planning to make in the Black Sea region.

This becomes clear from an article of the Austrian newspaper Der Standart outlining the advantages and disadvantages of the main players in the scramble to get the huge steel factory, for which Voelstahlpine has not chosen a country yet.

Der Standart reports that while the Ukriane and Turkey are also in the race, the main competition is between Bulgaria and Romania, and it is rather emotional.

According to the Austrian paper, Bulgaria is trying to attract the investor by offering cheap electricity, whereas Romania's trump cards are its infrastructure and its fast-growing auto industry, which needs steel products.

Der Standart quotes diplomats from Bucharest, who said that Sofia had been trying to get the steel mill investment at any price, and persons close to the Voelstahlpine management, who believe the Bulgarians were "the most aggressive" in the competition.

The speaker of Voelstahlpine, however, is quoted as saying that electricity was not as important for the Austrian concern as the logistics, infrastructure, and the supplies of raw materials.

In addition, last week the Austrian chancellor and the Romanian PM signed an agreement for the construction of a sea way on the Danube.

Voelstahlpine is expected to choose the location for its investment in the summer.
Business » Be a reporter: Write and send your article
Advertisement
Advertisement
Expats.bg All Are Welcome! Join Now!
More from Business