Georgi Gospodinov: I Miss the Piece of Paper* 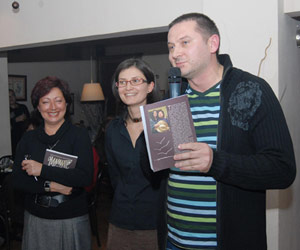 Photo by bulphoto
Georgi Gospodinov is one of the best-known Bulgarian writers. His "Natural novel" and the collection of short stories "And other stories" were published seventeen times abroad over the last five years, translated in all major European languages.

A: Yes, very much so. One of the games that I loved most to play as a child was hide-and-seek. When I was a child we used to play it all the time and made a pledge to continue to do so when we grow up. The last time that I remember playing hide-and-seek was with my cousins when I was in my third year in the University.

Q: Our game resembles pretty much the game of hide-and-seek game, because you never know what is in the hat....

Q: Your parents wanted you and your brother to become doctors, which you didn't...

A: Still my interest in biology and sciences remained. I am an avid reader of all kinds of things that have nothing to do with literature. I regularly buy newspapers about keeping bees and maintaining gardens.

Q: Do you have bee-hives?

A: No, but we used to have ones. Now I see them in my imagination. The idea is that if one day everything I am doing now fails, I will start keeping bees.

A: The first word is NEIGHBOURHOOD. I associate this word with the town of Topolovgrad. I lived there when I was ten-eleven-year-old on a street with the weird name "Sergeenko". That was the neighborhood where we pretended to be a band of Indians, each one had an Indian name and the movie ticket cost 20 stotinkas.

Q: Who was the leader of the band?

A: Not me. Let's say I was the first councilor.

Q: This is a pretty high-ranking title! You are not expected to perform the biggest of exploits, but still you are the brain.

A: You tell them how to make these exploits happen and then just get away. My Indian name was the Fast-Legged Deer.

Q: The next word is NOSTALGIA. Well, you seem to be stuck in the past with this game! Are you nostalgic about the childhood?

A: Yes, definitely. When you are a child, all your senses are wide open - the sounds, the smells are all there, in your childhood. I try to go back as far as possible in my memories and I can't remember anything but the garden in front of the house and the feeling that you are as high as the tulips... I also associate NOSTALGIA with memory and my last two books about the past and the socialist regime. They deal with one weird use of the nostalgia thing and the attempt to think it through.

A: The first thing that I wrote was a dream retold, that's why I associate dreams with writing. I was a small boy and the dream was really scary. My grandmother used to tell me that you should not tell other people about your bad dreams because they will come true. So I sat down and described it in a story. Very stupid of me!

Q: Is this how you started writing? You dreamed something and put it down on a piece of paper?

A: No, I wrote it down on the other day when I had the same dream for the second time and I decided to get rid of it. It was a cleansing technique, something like magic. Last year I met Polish writer Olga Tokarchuk and we talked about dreams. She said that was exactly her way of writing. It is very important to get hold of the dream in the first seconds after you wake up while you are half-asleep.

Q: Dreams do seem to make for good literature works, but have you noticed how boring other people's dreams can be?

A: Yes, I have noticed that. Still we always look for the sign in our dreams. Everyone wants to tell his own personal story. In fact telling personal stories has become lately very typical, something that was missing before. The bad thing is that the personal story is not always relevant to other people.

Q: A PIECE OF PAPER?

A: I've been missing the piece of paper lately. It was killed by the computer. I always go with a notebook in my pocket and put everything that impresses me down. I love how a piece of paper smells, for example.

Q: Does it make you tense?

A: Yes, especially the new notebook at the beginning of the year with all its blank pages. It is my habit to scrawl all over the paper before I start writing so that the tension eases.


*This is the tenth in a series of interviews published in the book Dumite (The Words) that brings together 48 interviews aired during Darik Radio's program "Who is Talking?", hosted by Prolet Velkova and Vesselina Petrakieva. The guests were asked to draw a number of words out of a straw hat. The book "The Words" was released on the occasion of the media's 15th anniversary.