Bulgaria Army to Be Reduced By 8,000 Soldiers 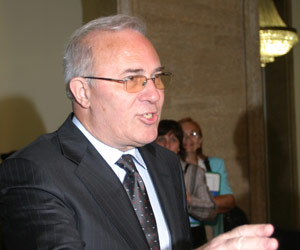 Bulgaria Defense Minister Vesselin Bliznakov suggested Thursday that 8,000 soldiers should be dismissed from the army. Photo by Yuliana Nikolova (Sofia Photo Agency)
As part of the strategy for the transformation of the Bulgarian armed forces, 8,000 soldiers and military personnel are to be laid off.

The news was broken by the Minister of Defense Veselin Bliznakov on Thursday after he changed his previous proposal over dismissal of 5,000 military officials.

"We are also going to close down several garrisons and a total of 60 military districts but in return the salaries of those, who continue working in the army, will be increased since January 1, 2009", the minister said.

Bliznakov declared that, together with the continuing modernization, social policy, participation in international missions, and natural disasters and crises management will be the main objectives of the armed forces in the following years.

It has been previously announced the Ministry of Defense is going to raise funds not only through by cutting the personnel but also by selling useless military real estate. 90% of that will be auctioned, and 10% will be bartered.