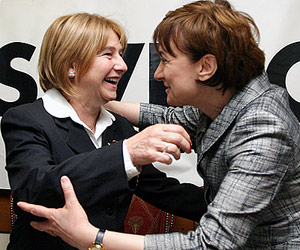 The Executive Director of LATONA Bulgaria Mariya Avramova (left), and the Executive Director of SIVECO Romania Irina Sokol (right) at the signing of the take-over deal on Wednesday. Photo by Yuliana Nikolova (Sofia Photo Agency)
The leading Bulgarian IT firm LATONA Bulgaria was purchased Wednesday by SIVECO Romania, the largest Romanian software company.

SIVECO's investment is the result of its close cooperation with LATONA, which started in 2003. This makes it the first Romanian software company to take over a foreign IT firm.

The deal is seen as resulting from the complete compatibility between SIVECO and LATONA as both companies have had considerable success in the incorporation of the integrated information system for Bulgaria's National Health Insurance Fund.

She explained that the Romanian software leader had varied experience in the public and the banking sector. SIVECO intends to use the practical skills, the good marketing approach, and the understanding of the local conditions of its Bulgarian partner LATONA for the realization of complex IT projects in the southeast European market.

"Though our involvement abroad we are now able to evaluate the experience we have had with eLearning, eHealth, eBusiness, and eGovernment projects. The Bulgarian market provides us with the opportunity to develop large-scale projects", Irina Sokol concluded.

SIVECO Romania, one of the largest system integrators at the Romanian marker, was founded in 1992. It exports software products to the EU, the Middle East and Eastern Europe. Its shareholders are Intel Capital, Polish Enterprise Fund V, and SIVECO Holland B.V.

SIVECO Romania is the first Romanian company which received first prize at the world IT championship WSIS. Its educational projects have been approved by the European Commission as "Best Practice".

LATONA also develops its own products for Help Desk, document circulation, E-Commerce, corporative and web-based IT decisions. It is behind the creation of information systems for Bulgarian courts, the Wine Producers Chamber, the Automated Monitoring System for Bulgaria's EU accession negotiation process, the Customs Agency, and the web system of the Bulgarian National Bank.

LATONA is a partner of global leaders in the IT and business consulting such as IDS Scheer, SAP, Autodesk, Oracle, and IBM.