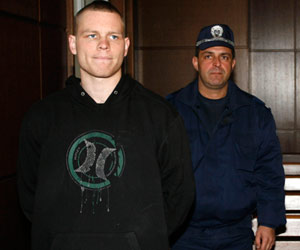 Paul "Jock" Palfreeman, 21, is behind bars in a Bulgarian jail, charged with murder and attempted murder after an alleged street brawl in the capital Sofia last Friday. Photo by Kameliya Atanasova (Sofia Photo Agency)
Australian national Jock Palfreeman, accused of stabbing to death a 20-year-old in Bulgaria, has acted in full consciousness, experts have concluded.

The psychiatric expertise shows that the defendant was aware of the consequences of his actions and does not have grounds to plead insane, the Bulgarian News Agency reported, citing sources from the prosecutor's office.

Paul "Jock" Palfreeman, 21, is behind bars in a Bulgarian jail after being charged with murder after an alleged street brawl in the capital Sofia at the end of December. Palfreeman also faces a charge of attempted murder over the alleged stabbing of a 19-year-old man during the fight.

The deadline for collecting materials on the case expires on February 28.

Bulgarian court experts claim Palfreeman's defence, who says he was acting in self-defence, is not backed by any evidence, with no further details of the case revealed so far.

Palfreeman, who is a trainee soldier in the British army, wanted British defence officials present to ensure a fair and transparent hearing because of fears that police and witnesses are not being objective.

But British army officials rejected the request, saying that because the man was not in Bulgaria for official defence purposes the matter was being treated as a consulate matter.