1 Dead, Hundreds Hurt at Rally against Kosovo Independence in Belgrade 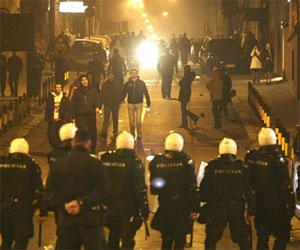 Serbian gathered Thursday at a protest against the recently proclaimed Kosovo independence in Belgrade that was followed by a violent attacks against some embassies in the city. Photo by B92
An unidentified charred body was found in the building of the US embassy in Belgrade after part of it was set on fire by Serbian protesters, who rallied late on Thursday against Kosovo's sovereignty, Darik News reported.

More than 150 people have been injured during the protest, journalists and policemen among them.

Small groups later targeted the Croatian, Turkish, British, Belgian and Canadian embassies but were beaten back.

The violence came as a result of the Serbs' anger by the Western support for Kosovo's unilateral declaration of independence.

All the attacks have drawn strong criticism from the US and the UN.

Most Serbs regard the former Serb province as their religious and cultural heartland.

"As long as we live, Kosovo is Serbia. Kosovo belongs to the Serbian people," he told the flag-waving crowd.

"This only keeps Kosovo distant from Serbia," he said.

After the speeches, the crowd marched to the city's biggest church, the Temple of Saint Sava.

Protest rallies were also held in the Bosnian Serb republic.

There were unconfirmed reports of injuries as several hundred protesters clashed with police outside the US consulate in Banja Luka.

In the coming weeks, an almost 2,000-strong EU mission will be deployed to help Kosovo develop its police force and judiciary.