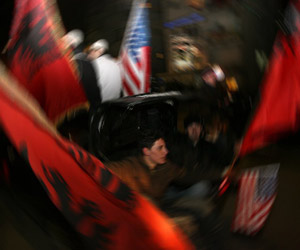 Celebrations began in Kosovo's capital, Pristina, late on Saturday in anticipation of the expected declaration of independence. Photo by Yuliana Nikolova (Sofia Photo Agency)
Bulgaria's nationalists have renewed with a vengeance their calls against recognizing independent Kosovo.

"Ataka party insists that Bulgaria refuse to recognize the independence of this artificially-born country that would bless a handful of criminals at its helm," Volen Siderov, leader of the country's biggest nationalist party, commented in an interview for Darik radio hours before the official proclamation of independence.

"It is like electing Dimitar Zhelyazkov for prime minister of Bulgaria," Siderov said, referring to one of the key players on the country's drug market, who was recently sentenced to a meagre 4,5 years in jail.

"Ataka is the only party in Bulgaria, which clearly voiced its stand on the breakaway province," Siderov said.

The nationalist leader described Sunday's historic declaration as "a bad precedent" that Bulgarians should take as a serious warning.