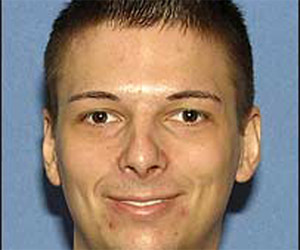 US police authorities identified the shooter in the Illinois campus attack as the former university's student Stephen Kazmierczak. Photo by BBC
US police authorities have identified the gunman, who killed five students before turning a weapon to himself, in a shootingopened at a university near Chicago, as a former student Stephen Kazmierczak, BBC reported Friday.

Kazmierczak had studied sociology there in 2007, officials revealed.
Chief Grady said it was not known why Kazmierczak - who was armed with three handguns and a shotgun - opened fire in a crowded lecture hall.

Another 15 people were injured before the ex-student killed himself.

The shooter was described by the police as having been an "outstanding, awarding student" and there had been nothing to suggest he would commit such an act.

But Kazmierczak, 27, has become erratic in recent weeks after he stopped taking some unspecified medication.

The Head of police at Northern Illinois University said it was still unclear how many shots had been fired, but 48 bullet casings had been found as well as six shotgun shells.

The university's president, John Peters, said there had been an outpouring of support from around the United States and the world following the attack.

A candlelit vigil is planned for Friday evening on the campus.

It had been reported earlier that Kazmierczak had killed six students before committing suicide, but DeKalb County Coroner Rusty Miller has revised that figure, saying that five students, not six, were killed.
Mr Miller said there had been confusion about the status of a patient being treated in a different county.

The shooting comes 10 months after 32 students and staff were shot by a student at Virginia Tech University in one of the worst shootings ever at a US school.