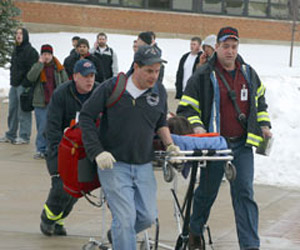 The shooting took place in an afternoon geology class when the gunman, all dressed in black and carrying a shotgun and two handguns, walked in front of the lecture hall and opened fire at some 160 students, CNN reported.

Police said the gunman's motive was still unknown and it appeared that he acted alone. The identity of the killer has not been released yet, but authorities said he is not a student in the campus, probably a student from elsewhere.