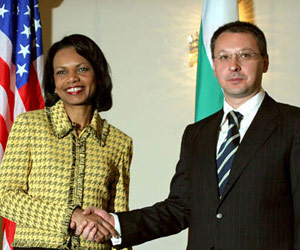 The program for their visit remains secret.

At a press conference in London on Wednesday Rice said that NATO forces in Afghanistan faced a real challenge. Together with Miliband she called upon NATO member states to contribute more troops and equipment to the fight against the Taliban primarily in the most dangerous southern provinces.

Their call came in the wake of Canadian PM's statement that his country's 2,500-strong contingent might have to pull out unless reinforcements were provided.

Rice stated that Afghanistan is a long-term mission for NATO with already visible results. She cited as proof the fact that the Taliban are increasingly unable to carry out large-scale terrorist attacks, and are forced to rely on suicide bombings instead.

The UK Foreign Minister declared that the 7,700 British troops in Afghanistan were capable of carrying out any task assigned to them.

As of December 2007 Bulgaria's contingent at NATO's International Security Assistance Force reached 420 troops but they are stationed in Kabul, away from the fighting.