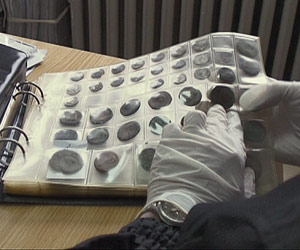 Ancient coins are a primary article for illegal treasure hunting and traficking. Photo by MVR
The Bulgarian Directorate for Combating Organized Crime captured a group of 19 treasure-hunters who carried out illegal archeological excavations and deals with moveable cultural monuments.

The news about the special operation which was simultaneously executed in five major Bulgarian cities, namely Plovdiv, Varna, Burgas, Ruse, and Dobrich, was announced on Tuesday, that is four days after the operation itself took place.

These cultural heritage items have been destined for sale abroad according to the police. The three leaders of the group have been released on bail but the Interior Ministry press service announced that the investigation continues.