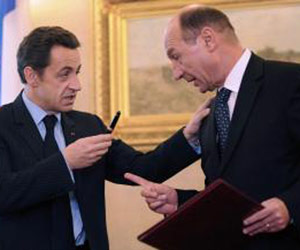 Presidents Sarkozy and B??sescu reinvigorated the historical French-Romanian cooperation with a formal strategic declaration on Monday. Photo by Le Monde
The Romanian Parliament ratified with an overwhelming majority the EU Reform Treaty on Tuesday after the French President Nicola Sarkozy addressed the Romanian parliament Monday.

Sarkozy had formal meetings with President Traian BДѓsescu and PM CДѓlin Popescu-TДѓriceanu, and signed a declaration for strategic partnership with Romania which is the first such document France signed with an Eastern European country.

France has important economic interests in Romania such as the Renault-owned Dacia car maker, and the mobile phone carrier Orange, as well as in the field of nuclear power.

The Romanian President BДѓsescu announced at the joint press conference with Sarkozy on Monday that Romania supported the French company Gas de France to become a partner in the Nabucco pipeline project.

The Nabucco consortium currently consists of five companies from the respective participant countries with Germany's RWE formally joining on Tuesday as a sixth participant. Nabucco is the European Union's key initiative to reduce its energy dependence on Russia by diversifying its gas suppliers with countries in the Caspian region.

Romania became the fourth EU member to ratify the Treaty of Lisbon amending the Treaty on European Union and the Treaty establishing the European Community.

The other newest EU-member Bulgaria has just initiated the ratification procedure Tuesday morning by tabling the Ratification Act for the EU Reform Treaty to parliament.