Half of USA Votes in Primaries on Super Tuesday 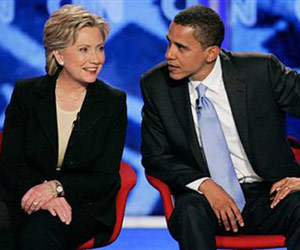 The Democratic Party presidential nomination race between Senator Hillary Clinton (left) and Senator Barrack Obama (right) is believe to be highly contested as US Democrats vote in primaries in 22 states.
For the first time in the history of the USA, 24 states will hold primaries and caucuses Tuesday to determine the candidates of the Republicans and the Democrats for the November 2008 presidential elections.

Both the Democratic and the Republican voters will go to the polls in 19 states. In three states, only Democrats will vote, and in two other states only Republicans will do so.

The Republican Party's race is rather contested with Senator John Maccain of Arizona leading to former Massachusetts governor Mitt Romney but the wnner is likely to be known on Super Tuesday.

The Democratic race between Senator Hillary Clinton and Senator Barrack Obama, on the other hand, according to many is so close that it may not be resolved even after Tuesday's Democratic vote in 22 states.

The races in both parties now essentially amount to a scramble for delegates to the respective party conventions, which will officially determine the presidential candidate. California, New York, New Jersey, and Illinois are the key states in the Super Tuesday Primaries.