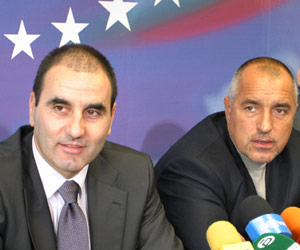 Sofia Mayor Boiko Borisov (right) and the formal chair of GERB Tsvetan Tsvetanov (left) lead Bulgaria's most popular party which currently remains outside Parliament. Photo by Yuliana Nikolova (Sofia Photo Agency)
Bulgaria's most popular party according to polls GERB made an agreement with the "Bulgarian New Democracy" parliamentary group to work for right-center government of the country.

The future cooperation was negotiated at meeting in the GERB party head office, which lasted an hour and a half. The most important issues on the agenda were health policy, social policy, and the fate of Bulgaria's biggest steel mill Kremikovtzi.

Bulgarian New Democracy (BND) consists of 17 MPs formerly from the National Movement for Stability and Progress (NMSP) the former Bulgarian monarch Simeon Saxe-Coburg who split off in fall of 2007 after internal party dissent. The NMSP is currently part of the coalition government.

BND's representatives at the meeting were its leader Borislav Ralchev and its members Lidiya Shuleva, Nikolay Svinarov, and Plamen Panayotov all of whom earlier held leadership positions at the NMSP.

The GERB party, whose informal leader is the Sofia Mayor Boiko Borisov, was represented by its formal chair Tsvetan Tsvetanov, and the vice chairs Lachezar Ivanov, Krasimir Velchev, and Yordanka Fandakova.

GERB and BND agreed to organize a meeting of all opposition political parties and their elected mayors to discuss the issues faced by the local authorities. GERB's chair Tzvetanov pointed out that the two formations reached an accord for the creation of what he described as an inter-parliamentary forum or union. GERB was formed after the 2005 parliamentary elections, and currently has no MPs.

"Our cooperation aims to create conditions for increased resources of the opposition", Tzvetanov stressed adding that their common opponent are the governing parties from the three-way coalition.

Both formations stated they were open for conversations with respect to President Parvanov's idea for electoral law reforms.

On BND's behalf, Lidiya Shuleva declared that they would fight to become an important factor in the government rather than just a participant in the elections.

Shuleva said that early parliamentary elections are possible, and her colleague Atanas Shterev who used to be the NMSP chair of the health commission in parliament, added that they may result from the government's incompetence in key spheres such as health policy.

When asked whether GERB would dismiss from the party structures its functionaries who were found to have worked for the state security apparatus of the former communist regime, the GERB chair Tzvetanov said that each case will be treated individually.

More names of former secret security associates who ran in the October local elections have been disclosed recently, and some of them are GERB members.