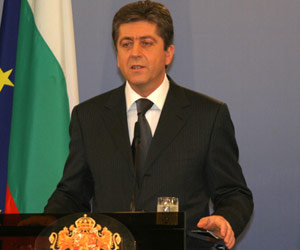 President Parvanov put forth his ideas for a mixed electoral system at a press conference on Sunday dedicated to the review of the first year of his second term. Photo by Yuliana Nikolova (Sofia Photo Agency)
The parliamentary group of the rightist United Democratic Forces (UDF) coalition invited all parties represented in parliament to consultations on Thursday regarding changes to the electoral laws.

"The political model in the country is seriously flawed and this was evident from the last local elections. That is why we need changes to the electoral system", stated Nadezhda Mihailova, a former leader of the Union of Democratic Forces, which is the leading party in the UDF coalition.

She stressed that as early as 2003 the UDF proposed decreasing the number of the MPs (currently 240) and increased majority rule in order to make the deputies more accountable to the voters.

Last Sunday Bulgaria's President Georgi Purvanov and former leader of the Bulgarian Socialist Party (BSP) presented to the public ideas for electoral reform at a press conference. On Tuesday the leadership of the BSP went on to create an experts' group to craft a package of legislative reforms.

When asked if the Union of Democratic Forces agrees with President Purvanov's proposal for a mixed electoral system, Mihailova said "Apparently he agrees with us, which is a good thing.

The leader of the rightist Democrats for Strong Bulgaria and former PM in 1997-2001, Ivan Kostov, also declared that the political parties need to debate on the political system in order to reform it.

Most political parties stated that the ideas for electoral reform are not new, and that they are ready to discuss them. The UDF MPs expect that representatives from all political parties will be present at the meeting on Thursday.