Putin: Russia Ready to Fund Belene with EUR 3,8 B Loan 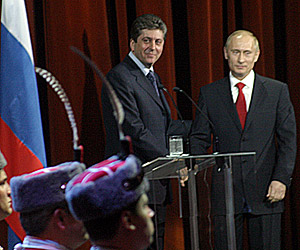 Bulgarian President Georgi Parvanov (L) and his Russian counterpart Vladimir Putin sealed on Friday the long-awaited EUR 4 B deal that will see Russia's state-owned Atomstroyexport design and build the reactors at Belene. Photo by Nadya Kotseva (SPA)
Russia is ready to fund the construction of two nuclear reactors at Bulgaria's Belene power plant on the Danube with a loan of EUR 3,8 B, Russian president Vladimir Putin said on Friday.

"We have set aside EUR 3,8 B for the needs of the Belene power plant in the Russian Federation budget and we are ready to make the funds available if they are needed," he told reporters after meeting with Bulgarian counterpart Georgi Parvanov.

The two heads of state sealed on Friday the long-awaited EUR 4 B deal that will see Russia's state-owned Atomstroyexport design and build the reactors, more than a year after Bulgaria picked the firm.

The total costs of the project are expected to run much higher, to the tune of EUR 6-7 B, and Russia is interested in developing the lucrative project further.

Construction on the two twin 1000 M units is expected to begin in the second half of the year, with 2014 and 2015 as the tentative deadlines for the two reactors to go online.

But the head of Russia's nuclear agency Rosatom, Sergey Kirienko, who is accompanying Putin on his trip, said that Atomstroyexport was counting on building two more reactors in the future.

"As we understand it, it's pointless to limit the Belene plant to two reactors. Should the first two units prove a success, we could build another couple," Kirienko said.

Bulgaria plans to pick a strategic investor for 49% in the company that will operate Belene by mid-2008 and has said it would use the cash to fund part of the costs.

Short-listed bidders - Czech CEZ, German E.ON and RWE, Belgian Electrabel and Italy's Enel - have all put in their improved bids earlier this month.

Also by summer, the country's power grid operator NEK, which will own the remaining 51%, has to pick the bank that will arrange the financing for the construction of the power plant.

For now, operating costs are covered by the EUR 250 M bridge loan contracted from BNP Paribas.

If the selection process is delayed, Bulgaria said it would use its fallback option and contract up to EUR 600 M from EU's Euratom agency and the European Investment Bank (EIB), with the cabinet underwriting both loans.