British Woman Mauled to Death by Her Neighbors' Dogs in Bulgaria 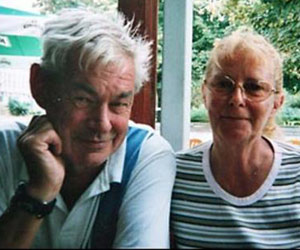 The 56-year-old Margaret Ann Gordon is pictured here with her husband. Photo by Darik News
The dogs that mauled to death a British woman last month in a village in south-eastern Bulgaria guarded her neighbors' home, a report said, denying initial claims that the foreigner fell victim to a pack of stray dogs.

The 56-year-old Margaret Ann Gordon, originally from Wallsend on North Tyneside, was walking her pet dog when the dogs attacked her on the outskirts of the tiny village of Nedyalsko. According to witnesses a shepherd managed to drive the dogs away, but the woman died from loss of blood before an ambulance arrived.

"Locals say the owners killed the vicious dogs, pitbulls, the night of the murder to cover up the traces of the crime," says Tonka Petrova, a journalist and spokeswoman of the German Castration Center near the town of Shumen.

The neighbor has been identified as Stoyan Subev, a farmer, who used to feed the dogs with the bodies of the dead animals from his herd.

According to 70-year-old Marijka Petrova, a friend of the British family, Margaret Ann Gordon lived in fear of her neighbors' dogs and was attacked at least six times by them before the fatal Tuesday.

"It was namely because of the dogs that the British family were planning to sell the house and move to the other end of the village," the elderly woman claims.

"Everybody knows who owns the dogs that killed Margaret, but nobody would tell the police because they are afraid," journalist Tonka Petrova says, adding that in private conversations they share they know the dogs have been killed.

The mayor of the village, 26-year-old Todor Zhelezov, who came into office just a few days ago, is taking the side of the farmer and denies the locals' claims. He admits he is among the best friends of the farmer's son, giving credibility to rumors that it was exactly thanks to him that he won the recent local elections.

"I found the husband Jim and another three Britons at the local pub, being interviewed by a British media," the journalist recalls. "The autopsy of his wife was not over but he had already drowned his pain in alcohol."

The man refused to talk to representatives of Bulgarian media and sped away in a car together with the team of British journalists.

The man has decided to bury his wife in December in the United Kingdom and sell the house.